2014–UPDATE: They did it! After 3 years of painstaking research and development! Visit the Typespec page and check out the Doves Typeface Revival.

The story of the Doves typeface is somewhat sad and gives the type a sense mystery and intrigue. The type’s creator, T.J. Cobden-Sanderson, had a feud with his business partner who was to inherit the type. Rather than allow his type to be defaced by his former partner, Cobden-Sanderson dumped all the type, along with all the punches and matrices (used to create new letters), into the Thames river. As he was advanced in age at the time, he could only carry pocketfuls of the type at a time, but he persisted every day until he had exhausted the entire supply. As Wikipedia sadly states, “The Doves Typeface is now lost forever.” But there is good news. The 7th Seal Type Foundry has posted an interesting four part series about a project to revive the typeface. Even so, in reading these articles, sadnesses mounts as the author describes the now defunct skill:

No modern type designer—trained to sit at a Mac all day fiddling with Beziér handles in Illustrator or Fontographer—can truly conceive, let alone acquire, such a fleet alignment of mind and physicality.

Edward Prince, the punchcutter that executed Cobden-Sanderson’s designs, was a prime example of this long lost craft. Another quote from the 7th Seal blog post:

It can be safely said that there is no-one alive today who has anything approaching an ounce of the skill he possessed. His near cosmic gift (and that of a multitude of many other forgotten, anonymous punchcutters) is now lost. Forever.

Ouch. Nonetheless, the foundry is still trying to bring back some of the long lost beauty. Type designer Torbjörn Olsson also created a revival of Doves in 1995 (I have emailed him requesting a copy of it), but it can potentially be improved by utilizing higher resolution scans as the 7th Seal Foundry appears to be doing. As of time of this blog writing, the Typespec page where the font is planned to be launched, has had a “coming soon”sign for over a year. Until then, we wait… 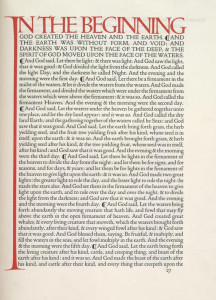